The historical development of Yoga

Before Iyengar yoga, there was a thousands of years old tradition / history of Yoga.

The historical development of Iyengar yoga 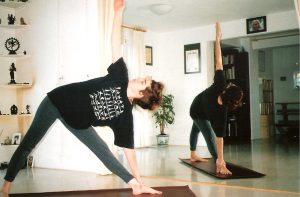 The name ‘Iyengar yoga’ calls often for misunderstanding: it is Hatha yoga according to the system of B.K.S. Iyengar. Having regard to the international reputation of B.K.S. Iyengar and the ever-growing interest in his specific approach to Hatha yoga, Iyengar yoga has become the term in general language.
Structurally speaking Iyengar yoga means an international network of national associations. There is now an internationally registered trademark, which include the name Iyengar yoga and the familiar logo. And in addition a number of training centers, teachers and students in all parts of the world have contact with each other. In the center of all this is the Ramamani Iyengar Memorial Yoga Institute (R.I.M.Y.I.) in Pune, India, named after the deceased wife of B.K.S. Iyengar. She has laid the first stone in 1973, but diseased before the official opening in 1975. At the head of this Institute were Yogacharya B.K.S. Iyengar, and now his daughter Geeta S. Iyengar and son Prashant S. Iyengar, and they give there most of the classes, and grand daughter Abhijata teaches there as well. For classes today there are more teachers, all trained at R.I.M.Y.I..

Mr. Iyengar, born in 1918, got classes in yoga of the renowned yogi T. Krishnamacharya in South India already back in 1934. Three years later, he was sent to Pune to teach and has remained there. He got married and is father of 6 children. Over 35 years experience provide a good foundation, also for the eventually establishment of the Institute. Here the daily classes (general classes) are given, including the special medical classes. There is waiting list for participation. And therefore if someone has no personal contact with the Institute, one is only allowed for submission after mediation by a certified teacher or an Association of Iyengar yoga in countries outside India.

Initially invited by his student Yehudi Menuhin (who called him; “my best violin teacher”) and J. Krishnamurti (known philosopher), Iyengar began, since 1954 (Switzerland), to travel regularly to the West. In 1956 he was in Paris and Brussels, and taught the Queen Mother of Belgium in, amonst other asanas, the head stand. Ten years later he is in Italy, and gets an audience with the Pope in the Vatican, because his Holiness had heard about the release of an important book with also a “religious” effect. That book was “Light on Yoga” by Mr. Iyengar that appeared in 1966, and internationally is seen as the basic book for Hatha yoga.

“Freedom is to be free from the chains of fears and desire”
B.K.S. Iyengar

In the Netherlands Hatha yoga according to the system of B.K.S. Iyengar was introduced in 1968 by Dona Holleman, who had met Iyengar in Switzerland and has followed him to India where she studied with him for almost a year. When she returned to the Netherlands she started in Breda, where she lived, with small yoga groups. Later, (when Dona Holleman moved to Italy where she still has a Yoga school), these were continued by, among others, Victor van Kooten, Annemieke van Kooten-Post and Agnes Mineur-Hille. And already in 1976 Mr. Iyengar was in Ulvenhout for a demonstration and in Tillburg for a lecture. Victor and Agnes were allowed to train people. In the following years Iyengar yoga has undergone a significant growth in the Netherlands. Now a day’s one finds teachers in all parts of Netherlands.

There was also the Iyengar Yoga Festival in april 1984 in the Kosmos, Amsterdam, where B.K.S. Iyengar was the guest of honor and he gave demonstrations (Sonesta Koepelzaal), gave lectures and workshops. And in 1987 he came to the Kosmos to start of the teachers-training officially, run by Clé Souren, with Nanda Peek, John Floris, Annemieke van Kooten-Post and Margriet Post also teaching. In August 1987, a group of teachers officially founded the B.K.S. Iyengar Yoga Association Netherlands on paper. And in 1995 it was made practical (with an active Board and a News Journal), with Charles Hond as an initiator and secretary. Just like the ones that also exist in a number of other countries as an umbrella and coordinating organization at national and international level.

In the United States and Canada there had been already some Iyengar Yoga conventions, and in August 1993 also the first European Iyengar Yoga Convention is held in Crystal Palace in London. Here about thousand teachers and students came together, to practice yoga one week long, under the leadership of Mr. Iyengar himself, above all to be inspired by the master. Participants came from many European countries, including Eastern Europe.

In 1994 to 1996 Mr. Iyengar was invited to lead the National Indian Yoga Congress in Rishikesh (Himalayas) and also taught there, especially pranayama (breathing exercises). In november 1997 there was a European Iyengar yoga teachers Convention in Paris. Here was John Floris from the Netherlands the private driver of Mr. Iyengar and John figured as example on the stage.

On 14 december 1998, Guruji (Shri B.K.S. Iyengar) celebrated his 80th Birthday. A 2-week festival was held for all interested people (750) in Pune, India. And over a year later, in January 2000, the Institute, RIMYI, existed 25 years. Guruji gave classes to 250 junior and senior teachers for a week, but given his age and a little cold, Geetaji frequently helped out. It was inspiring to see that interplay.
In 2003, our guru in December became 85 years and at this age it is no longer desirable to have to travel intensively and so Geetaji, his oldest daughter, was starting to pick that up. In 2001, she traveled for a Convention to the USA.

One year later in 2002 she was in Europe for several Conventions on tour, also 2 days in Amsterdam. In december 2004, Geeta became 60 years and celebrated that with a 5-day yoga Convention “Yog Sadhana” in Pune, India. More than 500 people were present from 25 countries. The participants were taught by Geetaji and her father B.K.S. Iyengar (86 years) at the same time. She finds it important to liaise with the various Iyengar Yoga practitioners. And she hopes that this will also continue to happen happen among the many countries, working together in harmony and to exchange new ideas.

In October 2005, Guruji yet made a tour in the USA following the release of his book “Light on Life”. In december 2008 there have been large festivities in Pune around his 90th birthday. After that, part of the participants also made a trip to his home village Bellur in South India. In April 2009 B.K.S. Iyengar was in Moscow for a four-day Convention where he taught 3 hours each morning. And in 2011, he led a large Yoga Convention in China. In 2013 at the age of 95 he was writing a new book on yoga “Yoga For Sports”.

Guruji, B.K.S. Iyengar, has passed away on 20 August 2014. May his soul rest in peace. Meanwhile, the Institute supported by his children keeps offering classes with inspiration.

In December of that same year, Geeta S. Iyengar has been teaching for a week at the Balawadi sport complex in Pune. There were no celebrations around Guruji’s birthday in the first year after his leaving us. In December 2015 she taught another week, Yoganusasanam 2, at the same location. And in 2016, Abhijata Sridhar-Iyengar, grand daughter of B.K.S. Iyengar, taught for a week, Yoganusasanam 3. Again one year later in December 2017, Prashant S. Iyengar, the only son of Guruji and brother of Geeta, gave a 6 day yoga session. That was also the beginning of the ‘Centenary year’, the 100th birth year of B.K.S. Iyengar. For one year, special events were organized worldwide everywhere. This memorial year ended in December 2018 in Pune with a 2-week convention with Geetaji and Prashantji and Abhijata all three as teachers.

Geeta S. Iyengar passed away on December 16, 2018. May her soul rest peacefully.

After 2010, Abhijata also started teaching outside of India. She was in Brussels in 2012 and in Warsaw in 2014, she also taught in Australia and the USA. In 2018 she made a tour in Europe to the four corners of the continent, teaching in Warsaw, Gothenburg, Marseille and Amsterdam.

In his final years, Guruji was busy improving the certification system he designed. Geetaji then worked it out, and in 2019 Prashantji and Abhijata completed the work as representatives of the Ramamani Iyengar Memorial Yoga Institute (RIMYI). In December 2019, all assessors and trainers from all national associations worldwide were invited to Pune to show and discuss this concept. The new system will be operational in the course of 2020.

Health is firmness in body, stability in mind and clarity in thinking”
B.K.S. Iyengar